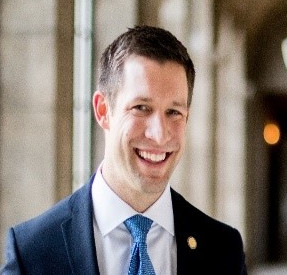 Before going to the University, Adam worked for two years managing the stockroom of a grocery store and working as a part-time news correspondent for his local newspaper while attending community college. He then worked his way through college and law school at the University of Nebraska-Lincoln.

In 2008, while still an undergraduate, he founded Civic Nebraska, a non-partisan, non-profit organization dedicated to building youth civic leadership skills, strengthening civic health in our communities, and ensuring elections are accessible for all Nebraskans. He is now the executive director of Civic Nebraska which employs over 100 full and part-time staff. Adam also teaches American Government as an adjunct faculty member at Doane University’s city campus.

In 2014 Adam was elected to the Nebraska Legislature to represent Northeast Lincoln with 68 percent of the vote, and was unopposed for re-election to another four year term in 2018. His focus in the Legislature has been affordable healthcare, maintaining a strong K-12 education system, living wage jobs, affordable higher education and trade programs, and protecting civil rights. In 2018 he helped start and lead the successful effort to expand Medicaid on the ballot which will provide health insurance for 90,000 working Nebraskans.